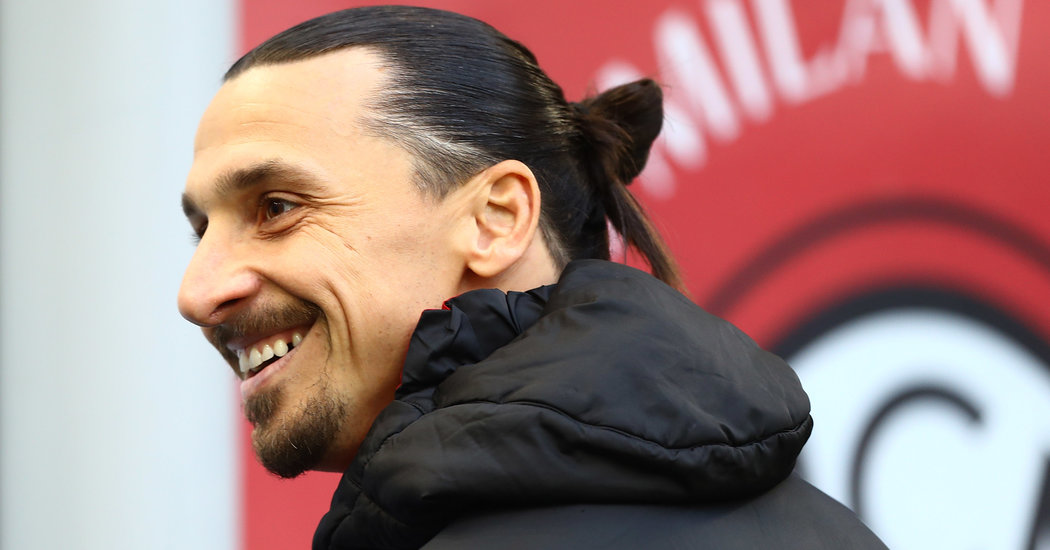 By this stage, Zlatan Ibrahimovic presumably has the image stored somewhere on his phone. You will have seen it, almost certainly: the one with Ibrahimovic, in profile, dressed in an angel’s robes and arm wrestling — a look of beatific concentration on his face — with a sinew-straining devil.

He used it first, if memory serves, when he signed a new contract with Manchester United in 2017, a summer after the move to England that was supposed to represent his swan song. The iconography is a little unclear: Ibrahimovic was committing himself to United — known to everyone except its own fans as the Red Devils — but, in the picture, he seems to be in competition with the devil. Angels and devils are, after all, traditionally on different sides of the argument.

He rolled it out again a few weeks ago, toward the end of December, when he confirmed his long-anticipated return to Europe from Major League Soccer, this time with A.C. Milan: another team that plays in red and black, another team that is known, though less officially, as the devils. “Same Zlatan,” the caption read. “Different devil.”

It is hard to date, precisely, when this schtick started. Ibrahimovic has certainly always been an outspoken character, unafraid to let the world know how he is feeling. He has never, even as a callow teenager at Malmo, his hometown club, been in any doubt as to just how special he is. He is, by nature, given to braggadocio, to hyperbole, perhaps to exaggeration.

The personality of Ibrahimovic is not the same as the character of Zlatan, though. That started — at a rough guess — with the publication of his memoir, “I Am Zlatan,” in 2011. In retrospect, that book marked something of a sea change. It was the moment Ibrahimovic did away with any attempt to resist his reputation as an egotist and decided to lean into it, to not just be Zlatan but to play him, too. It was the moment he started talking about lions.

Like the image of the Angel Zlatan, the lion is a leitmotif in many of his public pronouncements. His Instagram biography reads: “Lions do not compare themselves with humans.” It is a quote he conjured in a television interview while he was playing for United. He is clearly very pleased with it.

The decision paid off, of course. Ibrahimovic, for a long time, was regarded as something of a flat-track bully: a star for teams who could crush all of their domestic opponents but were unable to shine on the grandest stages. He will retire without winning the Champions League. He never scored a goal in a World Cup.

In recent years, though, that perception of him has — correctly — changed. England was always the last bastion of cynicism about Ibrahimovic. Scoring four goals in a friendly for Sweden in 2012 helped quell much of that resistance, and his displays in his two years at United, even late in his career, eliminated the rest.

But what England really fell in love with was not Ibrahimovic, the striker, but “Zlatan,” the cartoonish character, the marketing creation, the content provider. England loves eccentrics, but increasingly, and much to the nation’s detriment, it also loves banter: an entire country, putty in the hands of anyone who says something outrageous enough to bring the lols. (For further evidence, please see: The British General Election, 2019.)

It was that second wave of viral fame, as much as his gilded résumé, that made him such a coup for M.L.S. David Villa is a peer of Ibrahimovic’s in many ways, but when he arrived in America he did not warrant a series of grandiose full-page newspaper advertisements declaring his intention to conquer a city.

It would be interesting to know how much of this is accident, and how much design, how much of the public relations strategy — and make no mistake, “Zlatan” is in some part a P.R. campaign — is organic, an amplified version of Ibrahimovic’s own persona, and how much is confection. It has always felt as if Ibrahimovic is in on the joke, delivering the lines with a smile and a wink, but it is impossible to be sure.

Over time, it has become easier to believe that he is not. It has been nearly a decade since his book was published: nine years of nonsensical pronouncements and clever lines and comparisons with apex predators. The schtick is starting to wear thin. At some point, even those who are still laughing will realize that the joke wore off some time ago.

Television Killed the Magic of the Cup

In one sense, what happened in Niort last Saturday was not unusual. The home team — which plays in France’s second tier — was knocked out of the country’s cup competition by a semiprofessional side that operates, in theory, four divisions below. That is pretty standard for the Coupe de France, a tournament that is designed, in many ways, to encourage the minnows to overthrow the mighty.

What made this one stand out — what brought it to the front page of L’Equipe and earned it highlights on national television — was the identity of the victors: J.S. St.-Pierroise, a club based in Réunion, a French department in the southern Indian Ocean. Its players had traveled 6,000 miles — each way — to slay a giant.

St.-Pierroise is only the second overseas team in history to reach the tournament’s last 32; its presence there — it will play Épinal, a weaker opponent than Niort, next weekend — gives this year’s edition of the French Cup a little sprinkling of magic, one that is missing from pretty much every other domestic cup competition in Europe.

Only in England, though, does anyone really care. The demise of the F.A. Cup — now a competition resentfully contested by managers happy to put out reserve teams and throw their fates to the wind — is an ongoing national conversation; how to fix it is a staple of the January soccer diet.

And yet the thing that is killing the F.A. Cup is the same thing that made it special in the first place. For decades, the only soccer that anyone could watch on television in England was the F.A. Cup final. It gave the competition a unique prestige; in the 1950s and ’60s, winning the cup was a greater achievement than winning the league.

That was not true in the rest of Europe, where the domestic cup was seen for what it was: an added bonus, a bit of fun, a chance to give the lesser lights their day. England now is catching up. There is a lot of soccer on television. Indeed, television is so important to soccer now that the Premier League demands its teams play three times in the space of nine days over Christmas and New Year, so that by the time the F.A. Cup rolls around, everyone is exhausted. That old prestige has gone. It may just be time to accept it.

There was a strange moment, before the Champions League final last year, in the beIN Sports studio in Madrid. José Mourinho was sitting next to Arsène Wenger, his old adversary — that was strange enough — when he turned in his seat and stopped talking.

Instead, he watched Liverpool’s fans, awaiting the game’s kickoff, sing the club’s anthem, “You’ll Never Walk Alone.” Eventually, Mourinho snapped out of his reverie. “This is more beautiful than what we can say,” he said. Wenger concurred. “It is unique,” he said.

What Wenger said was unsurprising: He often praised Liverpool, and particularly Anfield. He has, previously, called it the worst stadium in the world for an opposing team. Mourinho, though, has always been — how shall we put it? — a little more fractious in his attitude.

Mourinho, it is fair to say, does not like Liverpool. The longstanding theory is that it’s because he was once overlooked for the manager’s job there, but whatever the reason, he has always taken particular pleasure in frustrating his old foe. His view of Jürgen Klopp, too, is not what you would call universally positive.

That makes this weekend’s visit of Liverpool — unbeaten in the Premier League — to Tottenham a perfect sort of Mourinho occasion. He has a team weakened by injury — Harry Kane was the latest, now ruled out for months, the team said Thursday — and on a poor run of form. He has an opponent that is being talked of as an unstoppable force. Mourinho would love to be the man to disprove that notion, to throw a spoke in Liverpool’s wheels. His back is against a wall. And that, with Mourinho, tends to be when he is at his best.

Michael Rose, quite rightly, points out that there tends to be far more coverage of the scale of soccer’s racism problem — a subject we have covered, distressingly, far too often in the last few years — than there are serious discussions of how to go about tackling it.

“Closing stadiums and/or fines have failed,” he wrote. “I have long thought teams should be deducted points. Some might say this is one of the nuclear options, but surely it is a step worth taking to protect the players.”

It is, Michael, but there are other changes that might help, too. I’d do away with stadium closures, and replace them with flipped games: Repeat offender clubs should be stripped of a certain number of home fixtures and forced to play them on the road instead. That is a much more punitive sporting measure, to my mind.

But I’d also like to see the emphasis shifted. It tends — for obvious reasons — to be players on visiting teams that are abused. The responsibility for deciding whether a match should continue should therefore fall on the home team. Only when fans see their own players condemning their behavior will they be denied the sense that they have successfully unsettled an opponent.