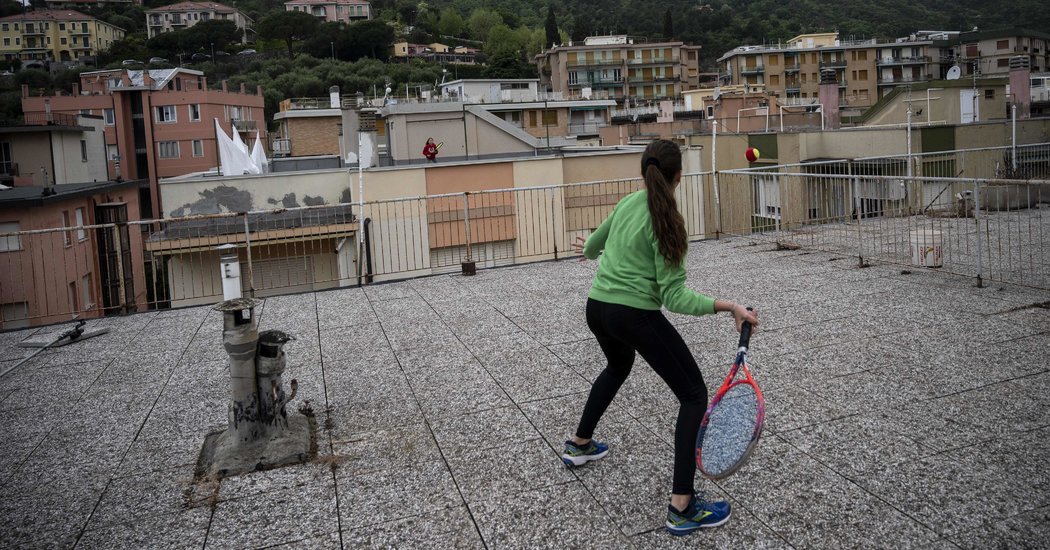 After their tennis club in Finale Ligure, Italy, was shut down in early March, Vittoria Oliveri, 14, and Carola Pessina, 11, were challenged to come up with a way to stay in shape. Their teammates (and Roger Federer) posted videos of themselves hitting balls against walls or practicing in stairwells.

Vittoria and Carola took it to the next level, creating a court between their rooftops. They had to avoid various objects, like boiler vents, as they played.

“It was their idea,” their coach, Dionisio Poggi, told Agence France-Presse. “They know each other well, they’re friends, and they live in neighboring buildings.”

It was posted on the ATP Tour’s Twitter page, where it has been viewed 9.1 million times. Tennis greats like Tracy Austin tweeted out their admiration.

“This is next level #TennisAtHome,” Austin said. “I don’t think this can be topped. Keep the ball deep.”

Federer and Rafael Nadal, you’re up next.

Come on, guys, these quarantining rules are serious business. And the authorities aren’t going to just let them slide. Even if you’re Tom Brady.

Brady, of course, is now a Tampa, Fla., resident. He is staying at Derek Jeter’s mansion, which has seven bedrooms, nine bathrooms and more than 30,000 square feet.

He was exercising in a public park in his new hometown only to be approached by a worker who told him the park was closed.

In a news briefing, Mayor Jane Castor of Tampa said: “Our parks are closed down, and so a lot of our park staff, they patrol around just to make sure that people aren’t in contact sports and things. They saw an individual working out in one of our downtown parks and she went over to tell him it was closed, and it was Tom Brady.”

Mayor Rick Kriseman of Tampa’s sister city, St. Petersburg, who was also at the briefing, responded with unfeigned excitement, “Oh my goodness. Wow!”

In a tweet, the city of Tampa said: “Sorry Tom Brady! Our Tampa Parks and Rec team can’t wait to welcome you and our entire community back with even bigger smiles — until then, stay safe and stay home as much as you can to help flatten the curve.”

He was sighted, the city confirmed, not cited. There was no immediate comment from Brady on the park incident. VICTOR MATHER

It probably isn’t fair to call Rudy Gobert the Patient Zero of the coronavirus in sports. But he was one of the first high-profile athletes to contract it. And before testing positive he had made light of the virus by jokingly touching every reporter’s microphone and notebook at a news conference.

His positive test was also the immediate cause of the N.B.A.’s shutting down its season on March 11. And a teammate, Donovan Mitchell, soon tested positive as well. (Both players are now clear of the virus.)

Gobert, whose case of coronavirus was mild, is back to joking around, although this time thankfully without potentially putting anyone in danger.

It started when Evan Fournier of the Orlando Magic, a close friend of Gobert’s who has defended him in recent weeks, elected to shave his beard. Perhaps Fournier thought he now looked a bit like Freddie Mercury; he wrote a caption for a photograph of his new look with the title of a Queen song, “I Want to Break Free.”

Gobert disagreed, thinking Fournier looked more like a waiter. He retweeted the photo with a quip in French: “I’ll have salad with tomato, onion and samurai sauce, and a small fries, s’il vous plait.” (Samurai sauce, popular in France, is made of mayonnaise, ketchup and chili peppers.)

Twitter has, of course, replaced the Catskills as the spiritual home of the one-liner, and many athletes with time on their hands are using it to try out new material. The hard-living golfer John Daly created a minor stir when he advocated drinking a bottle of vodka a day as a way to get rid of the coronavirus. The situation was magnified when Trump Golf retweeted the video.

Daly responded to the kerfuffle by assuring everyone that “I did a video for fun to put some laughter in us through this tough time.” He threw in a shot at the World Health Organization and, uh, members of the news media: “Grow up reporters, Y’all are a joke!” We’ll try, John. VICTOR MATHER