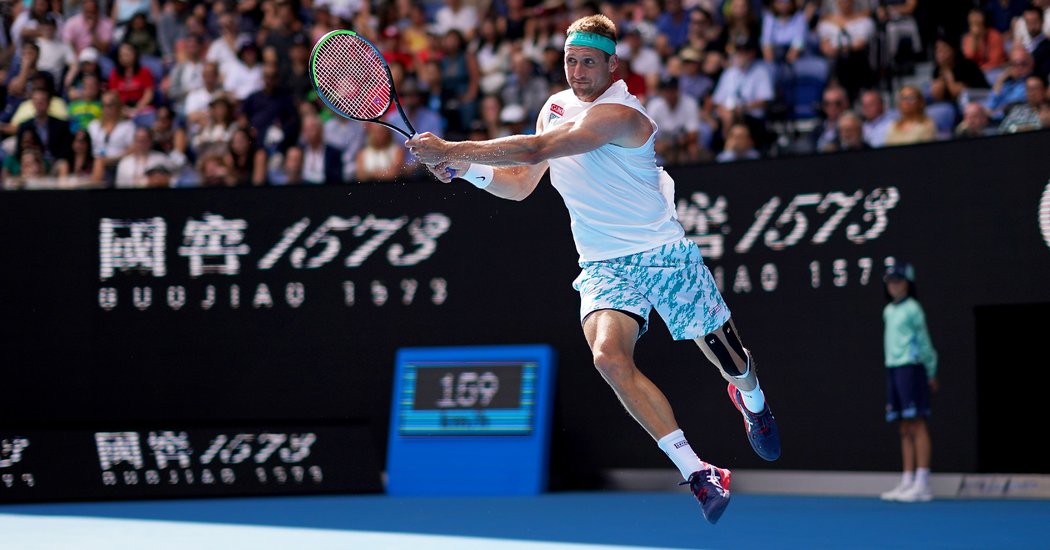 Tennys Sandgren, who was on a roll before professional tennis shut down, has had enough of video games and self-isolation in his home near Nashville, Tenn.

Such extreme measures will not be necessary, just a 12-hour road trip next week. Sandgren plans to drive to West Palm Beach, Fla., to play in the UTR Pro Match Series, the first top-tier tennis exhibition in the age of the coronavirus, and hardly the last.

Sandgren, an American who had seven match points in the quarterfinals of the Australian Open in January before losing to Roger Federer, is set to play May 8-10 against Matteo Berrettini of Italy and the rising Americans Reilly Opelka and Tommy Paul.

The matches, to be played on a private hardcourt and broadcast on Tennis Channel, will be singles only, with no live spectators and just one match official to respect social-distancing requirements.

“We’re trying to bring pro tennis back on linear TV, and we’re doing it in a way that is super safe,” said Mark Leschly, the chairman and chief executive of Universal Tennis, the tennis rating and organizational platform that is backing the event with Tennis Channel.

It is part of a wave of competitions that are trying to fill some of the void created by absence of the professional tours, the ATP and the WTA, which have shut down for at least four months because of the pandemic.

The International Tennis Series, a package of men’s round-robin events primarily involving players ranked well outside the top 100, has been streaming on ESPN3 since mid-April from another private Florida court. Most of the matches have been streamed with a single fixed camera and without commentary, as passing traffic and the players’ mutterings provide most of the soundtrack.

Dustin Brown, a flashy German pro who once upset Rafael Nadal at Wimbledon but has slipped to No. 239 in the rankings, will take part this weekend — with a group of lower-ranked players — in the first of a series of German exhibition events at a club in the town of Höhr-Grenzhausen.

Patrick Mouratoglou, the Frenchman who coaches Serena Williams, announced a series of events called the Ultimate Tennis Showdown that would begin later in Mayat his tennis academy near Nice. Mouratoglou said that 10th-ranked David Goffin had committed to the first event along with Alexei Popyrin, a promising Australian who is ranked 103rd and whose father initially had the idea for the series. It is being designed to appeal to a younger audience with in-match coaching and fewer restrictions on player behavior than at tour events.

Nadal has also discussed the possibility of broadcasting exhibitions from his academy in Majorca, Spain, once government restrictions allow that.

The UTR series will continue at a women’s event May 22-24 in West Palm Beach, with 19th-ranked Alison Riske, No. 28 Amanda Anisimova, No. 51 Danielle Collins and No. 56 Ajla Tomljanovic. Leschly said there were also plans to stage events in Australia with leading players.

There are plenty more such projects.

They reflect the paradox that tennis is straightforward to play while respecting social distancing but also complex to restart on the tour level because of its international cast and the need for players and officials to cross global borders frequently.

On a small scale, the risks are minimal. There is little chance of direct or close body contact when two singles players face each other. Handshakes can be nixed, and players can change ends on opposite sides of the court. During the exhibitions, each player also uses a different set of balls while serving to reduce — though not eliminate — the risk of contamination from both players handling the same ball.

“You can control the settings a lot more,” Sandgren said. “There’s way less players and way less extra stuff going on, so you can take more extensive precautions.”

Both the WTA and ATP Tours will not resume regular tournament play until July 13 at the earliest, although the rest of the 2020 season remains in doubt, including the U.S. Open, scheduled for Aug. 31 to Sept. 13.

Andrea Gaudenzi, the ATP chairman, said last week that a decision would be made about the remaining July tour events by May 15 and about the August events by June 1. Mike Dowse, the chief executive of the United States Tennis Association, has said he expects the association to decide sometime in June whether to proceed with the Open.

Dowse said that holding the U.S. Open without spectators would be an option, though not appealing for the atmosphere or the ticket and luxury-box revenue. But the mushrooming exhibition circuit certainly presents an opportunity for everyone in the game to see how tournaments could work.

“The world has changed, and we must adapt and innovate,” Leschly said. “Local, individual and small group play will be the new normal for the foreseeable future.”

Players will call their own lines at the UTR events, with the chair umpire having the right to overrule. The court will be disinfected between matches. Though no ATP points are available, the results will count toward players’ Universal Tennis Rating, a system that has fast become a point of reference at the junior and collegiate level and is being incorporated into some coverage of the professional game, in part because Tennis Channel is a commercial partner with UTR.

The modest prize money and, in some cases, appearance fees on offer are also a chance to earn for out-of-work players, particularly lower-ranked ones.

“It’s nothing big, four figures worth of prize money total for the day,” said Harry Cicma, the promoter of the International Tennis Series, which features four players in round-robin play at a time. “But it’s not bad considering we’re going every day for four months.”

With tennis concerned about participation rates and an aging audience, the new events are a chance to get live competition back on screens ahead of other sports. The events do create concerns about integrity, however. It is possible to gamble on most of these matches. Though these are not official tour events, ATP-level players who take part, like Berrettini and Sandgren, are still under the jurisdiction of the Tennis Integrity Unit, which investigates match-fixing and betting-related corruption.

In a message sent to players, coaches and agents on April 15, the ATP warned that there “may be an elevated risk of corruption and corrupt approaches in some of these environments.” The message also reminded players that they may not be employed or sponsored by a betting company.

“They will still be subject to anti-corruption rules, and the T.I.U. has issued guidance to players in this respect,” Mark Harrison, a spokesman for the integrity unit, said on Thursday. “It is vital that as these new events begin to appear, they regard integrity as a non-negotiable central priority.”

Some recreational players and many professionals have continued to play on private courts, including Sandgren, who has a backyard hardcourt that he recently refurbished.

“I normally train at Vanderbilt University, but those courts are shut down,” said Sandgren, who has spent the last several weeks living on his own and even taking an open online neuroscience course from Harvard. The virtual world has its limits, however. Time for some real-world thrills after a long road trip.

“I like video games, but I’m starting to get tired of it,” Sandgren said. “When we started quarantine, I could play for 10 hours in a row, but now I hit 15 minutes and I’m like, ‘Nope, no dopamine to be had here anymore.’”