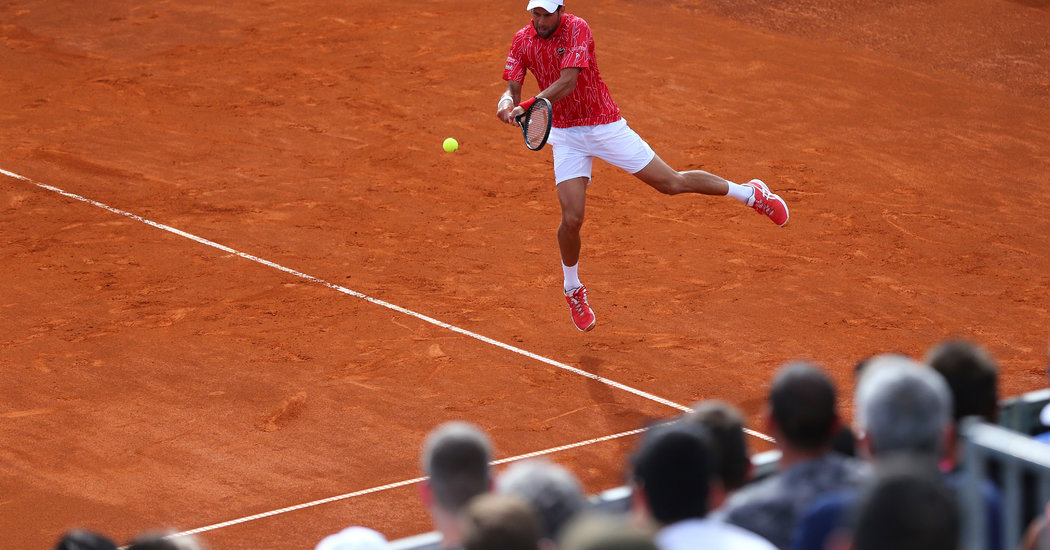 Novak Djokovic, the world’s top-ranked male tennis player, said on Tuesday that he and his wife, Jelena, had tested positive for the coronavirus, after days of growing criticism over a tournament he organized after which other players and coaches were also found to be infected.

The exhibition tournament, called the Adria Tour, was supposed to bring some of the world’s best players to Balkan nations, including Serbia, where Djokovic is from, and provide some income for the participants and some welcome entertainment to tennis fans who haven’t seen professional games since March.

No one wore face masks and social distancing wasn’t enforced in the stands during the series. Players mingled freely with each other after matches and posed for photographs with ball kids and tournament officials. There was no systematic testing done for the coronavirus on the participants before the event began, according to the organizers. Besides the Djokovics, at least three prominent players — Grigor Dimitrov, Borna Coric and Viktor Troicki — and two coaches tested positive, prompting fears among the authorities in Croatia and Serbia that the athletes may have triggered a new wave of infections.

In Zadar, a small coastal town in Croatia that had no confirmed infections until it hosted a leg of the competition, the authorities were left scrambling to trace and test people who might have come in contact with Dimitrov, a Bulgarian player who said on Sunday after returning to his home base in Monaco that he had tested positive.

Djokovic returned to Belgrade, the Serbian capital, after the tournament’s final on Sunday was called off. He caused a stir in April after he suggested that he would rather not be vaccinated against the coronavirus. The Serbian player has said he wanted to know what is best for his body, while keeping an open mind.

“Everything we did in the past month, we did with a pure heart and sincere intentions,” Djokovic said in a statement announcing his positive test. “Our tournament meant to unite and share a message of solidarity and compassion throughout the region.”

He said before the event began in Belgrade earlier this month that the tour was following guidelines from local authorities by not imposing strict restrictions on player contact and by allowing spectators to attend matches.

“We organized the tournament when the virus has weakened, believing that the conditions for hosting the tour had been met,” Djokovic said Tuesday. “Unfortunately, this virus is still present, and it is a new reality that we are still learning to cope and live with. I am hoping things will ease with time so we can all resume lives the way they were. I am extremely sorry for each individual case of infection. I hope that it will not complicate anyone’s health situation, and that everyone will be fine.”

Djokovic said that his two young children — Stefan, 5, and Tara, 2 — had tested negative for the virus and that he would remain in isolation in Belgrade for the next 14 days. The remainder of the tour, scheduled for Banja Luka and Sarajevo in Bosnia and Herzegovina, has been canceled.

Three other leading players who took part in the tour — Marin Cilic, Alexander Zverev and Andrey Rublev — all announced on Monday that they had tested negative for the virus but would also self-isolate for two weeks.

Djokovic, 33, is not only the top player in the world, he is also president of the ATP Player Council, which has been actively involved in planning for the return of the regular men’s tour. The tour has been shut down since March because of the pandemic and is now scheduled to resume in mid-August at the earliest. When it resumes, the plan is to do so without spectators and with strict testing and health protocols in place.

Several top players have criticized Djokovic’s decision to organize the Adria Tour without any such measures, arguing that it not only risked public health, but sent the wrong message to the wider world. “Apparently there’s a pandemic,” Andy Roddick wrote on Twitter.

“A horror show,” said Bruno Soares, a Brazilian doubles star who is also a member of the player council, in an interview with GloboEsporte. “With the situation in the world, even if you are at the North Pole, you don’t go out and party and post the photos on Instagram.”

“That’s what happens when you disregard all protocols. This IS NOT A JOKE,” wrote the Australian player Nicholas Kyrgios.

Other players have been less critical of Djokovic directly. “It’s not Djokovic who is at fault,” said Richard Gasquet, a veteran French player, in an interview with L’Équipe on Monday. “He did not put a gun to people’s heads and demand that there be 5,000 spectators. It’s the government that chose to welcome these 5,000 people in a single site. But it’s true that all those people, it was crazy. It’s the only place in the world where we saw a crowd like that.”