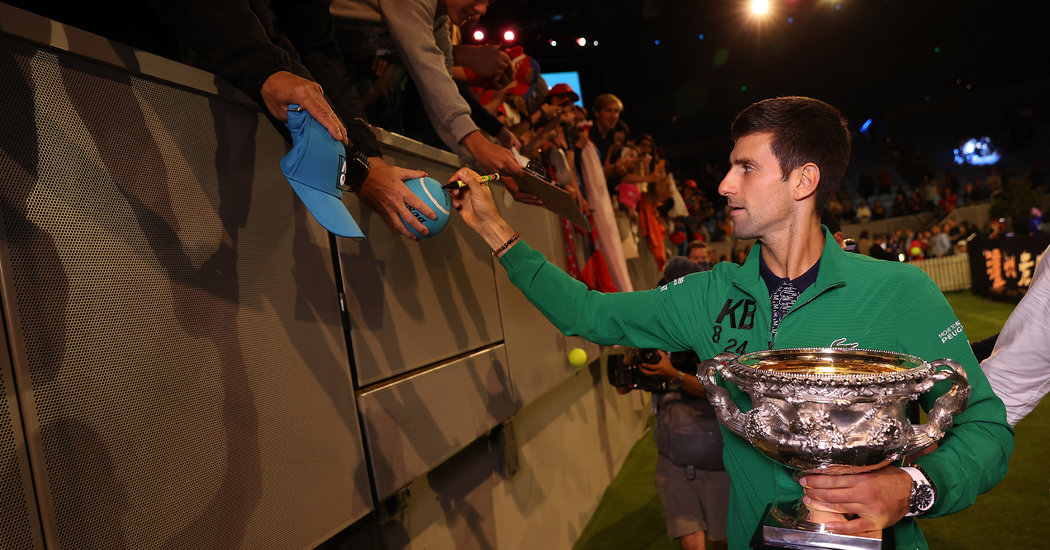 Novak Djokovic, the world’s No. 1 men’s tennis player, caused a stir with comments over the weekend suggesting he would have a difficult decision to make if receiving a coronavirus vaccine became mandatory to compete on the tennis circuit.

“Personally I am opposed to vaccination and I wouldn’t want to be forced by someone to take a vaccine in order to be able to travel,” Djokovic said in comments reported and translated Sunday by Reuters. “But if it becomes compulsory, what will happen? I will have to make a decision. I have my own thoughts about the matter, and whether those thoughts will change at some point, I don’t know.”

Djokovic, the 32-year-old Serbian star who has won 17 Grand Slam singles titles, was speaking with a group of Serbian players on a live Facebook chat when he made the comment. Djokovic is staying in Spain with his wife, Jelena, and their two children during the lockdown.

In a statement released Monday through his management team, Djokovic declined to address whether he opposed vaccines in general. He focused his opposition on the issue of whether a Covid-19 vaccination, which has not been developed yet, would be necessary for travel. He also made it clear that he was intent on exploring options other than vaccination, but he did not rule out accepting one if necessary.

“I am no expert, but I do want to have an option to choose what’s best for my body,” he said. “I am keeping an open mind, and I’ll continue to research on this topic because it is important and it will affect all of us.”

He added: “To be honest, just like the rest of the world I am a bit confused. Despite having access to information and resources, I am left in doubt about what could be the best thing to do.”

The professional tennis tour has been shut down because of the virus since early March and will not resume until July 13 at the earliest. Wimbledon has been canceled for the first time since 1945, and dozens of tournaments have been postponed, including the French Open, which was scheduled to be the next Grand Slam tournament, in May.

Because of its global nature, the tennis tour faces significant challenges in resuming because it will need to ensure that players are able to cross international borders freely in order to compete.

Several coaches and players, including the former women’s No. 1 Amélie Mauresmo of France, have speculated that the tour will not be able to restart without a vaccine.

Djokovic has become an active proponent of natural healing, and he was deeply resistant to undergoing surgery on his injured right elbow before finally deciding to have a procedure in 2018.

In the group chat on Sunday, Djokovic said he was interested in emphasizing ways to help people boost immunity to combat the coronavirus and other illnesses. He re-emphasized that in his statement on Monday.

“I am curious about well-being and how we can empower our metabolism to be in the best shape to defend against impostors like Covid-19,” he said.

Predrag Kon, a Serbian epidemiologist who is part of the Serbian government’s effort to combat the virus, expressed dismay about Djokovic’s comments on vaccination.

Djokovic and his wife have donated one million euros, or about $1.1 million, to help the Serbian authorities purchase respirators and other medical equipment. Serbia has reported 6,630 coronavirus cases, and 125 deaths. Djokovic, who speaks Italian and once had a training base in Italy, has also donated a large but unspecified amount to hospitals in northern Italy, which has been hit particularly hard by the virus.