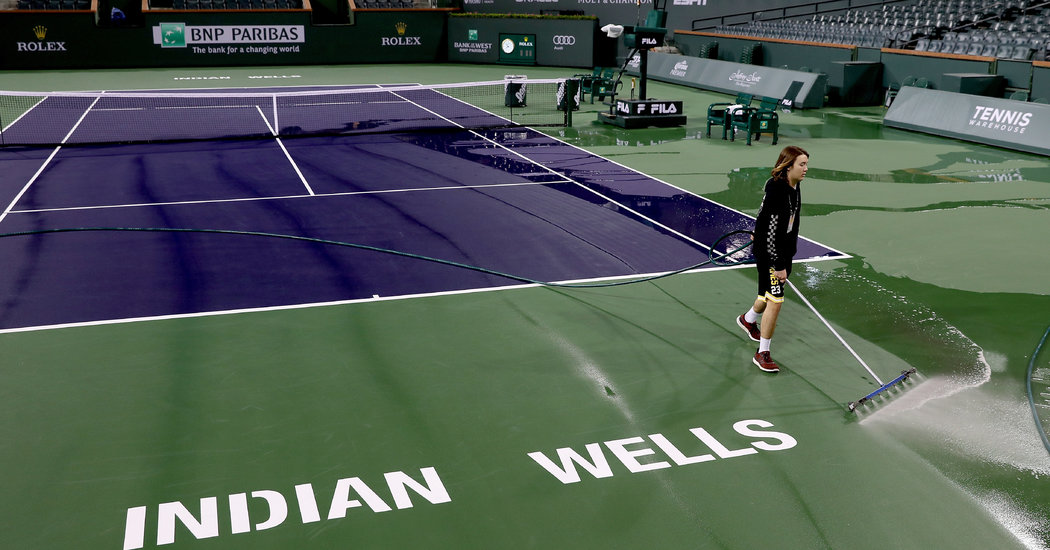 The leaders of tennis’s governing bodies announced the creation of a relief fund on Tuesday to help lower-ranked players weather the crisis created by the coronavirus pandemic.

“It’s taken us a little bit of time, but the good news is that we’ll be addressing this in the right way,” said David Haggerty, the president of the International Tennis Federation.

While the final details are still being negotiated, the fund is expected to amount to more than $6 million, with $1 million contributions expected to come from each of the four Grand Slam tournaments: the Australian Open, the French Open, Wimbledon and the United States Open.

The men’s and women’s tours — the ATP and the WTA — are also expected to contribute close to $1 million each The I.T.F., which oversees many of the lower-level professional events as well as the Davis Cup and Fed Cup team events, will also contribute, even though it recently announced furloughs and temporary salary reductions. Haggerty said the I.T.F. would contribute out of its reserves.

The fund, which is to be administered by the ATP and WTA tours, will primarily benefit men’s and women’s players ranked outside of the top 200 in the world in singles.

That group includes veterans who have slipped back and youngsters trying to make their way to the top. The professional tours have been on hiatus since early March because of the pandemic. Wimbledon, which was set to run in late June and early July, was canceled for the first time since 1945, and scores of events at all levels of the tours have been postponed.

Though the game’s stars have ample reserves to help them weather this long, unexpected break, lower-ranked players are in a more vulnerable position. The concern among the game’s leaders is that some promising talents may leave the sport altogether.

As independent contractors, players could be eligible for unemployment benefits in some countries during the crisis, including the United States. Others should get some help from their national tennis federations, as has already been announced in Britain and France. But many lower-ranked players are on the edge.

“Especially outside the top 100, a lot of guys tend to make their living on a week-to-week basis,” said Christopher Eubanks, a 23-year-old American ranked 238th on the ATP Tour. “So any kind of financial assistance would allow us to be able to maintain our necessities. I think having the peace of mind, knowing we have rent and food covered and money to train, would be very helpful.”

Eubanks was a collegiate star at Georgia Tech. “Right now, I’m fine financially, but it’s tough to really be able to know,” he said. “You don’t know when this is going to end. It could go for three months or six. Am I OK for six? I hope so, but I am not entirely sure.”

One of the sticking points in negotiations has been determining how many players should receive assistance.

Some in the game, including the leaders of the Grand Slam events, want to help players ranked from 150 to about 500. Novak Djokovic, the top-ranked men’s player who is also president of the ATP player council, has been pushing for relief for those ranked between 250 and 700. He has support from Rafael Nadal and Roger Federer, who are both also on the player council.

“Outside of 250 is where the real financial struggle is,” Djokovic wrote in a message sent to a group of players last week. “We feel that we all need to get together and help these guys out.”

He added: “Many of them are thinking to leave pro tennis because they just can’t survive financially. Unfortunately, there is a very large amount of players in the group between 250 and 700 that is not supported by federations or don’t have sponsors.”

Djokovic, Federer and Nadal, who all have earned more than $100 million in career prize money, have proposed that the top 100 men’s singles players contribute to the relief fund on a sliding scale, with those in the top five contributing $30,000 and those ranked from 51 to 100 contributing $5,000. Top 20 doubles players would also contribute $5,000 each.

In total, this would generate about $1 million, which would come on top of the more than $6 million to be contributed by the seven governing bodies.

But Djokovic said in an Instagram Live session on Tuesday that the players had not embraced the scaled concept and that any donations to the fund from them would be voluntary. It is unclear whether the leading women’s players are considering a similar proposal, but Steve Simon, the chief executive of the women’s tour, confirmed that the WTA had already provided approximately $3 million in relief to its players. He said that had come through rebates on membership fees and from payment of the equivalent of first-round prize money for the BNP Paribas Open tournament, which was postponed shortly before it was to begin in early March in Indian Wells, Calif.

First-round prize money in the main draw of the singles tournament was supposed to be $18,155. Simon said the players had been paid out of tour funds. It remains unclear precisely how much men’s and women’s singles players will receive from the new joint relief fund. Djokovic and the players’ group were pushing to provide a total of $10,000 from the fund to each man ranked between 250 and 700 who meet certain criteria.

“We want to avoid handing the money to players that don’t really need it,” Djokovic wrote.