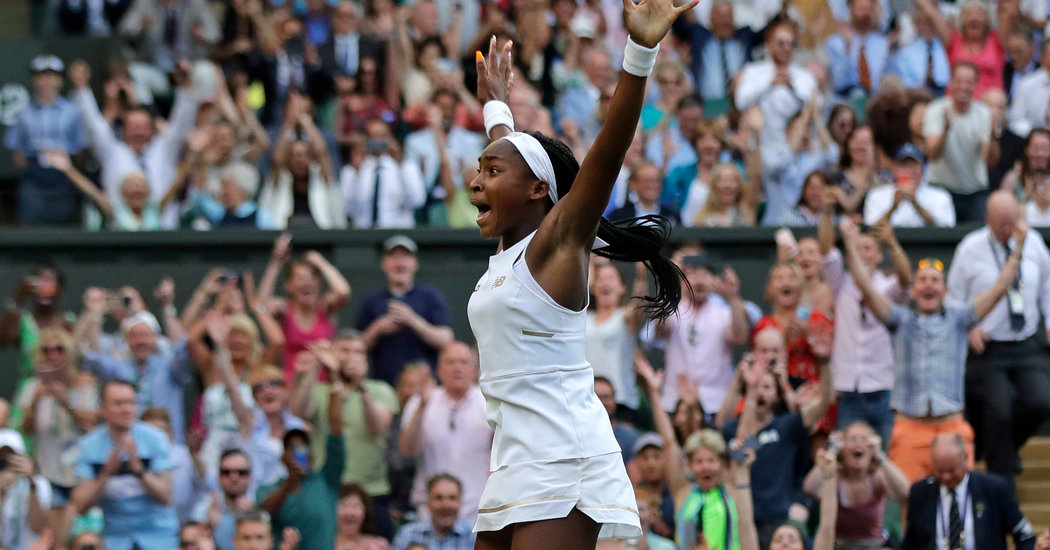 Coco Gauff, the American tennis prodigy who made inspiring runs at the last three Grand Slam tournaments, made it clear last week that her precocious rise did not happen without distress.

In a forthright post for “Behind the Racquet” — a series created by the American player Noah Rubin — Gauff, 16, discussed grappling with early success, big expectations and her feelings about the sport.

“Throughout my life, I was always the youngest to do things, which added hype that I didn’t want,” she said. “It added this pressure that I needed to do well fast. Once I let that all go, that’s when I started to have the results I wanted.”

She said she struggled until “right before” Wimbledon last year, when at age 15 she rose to prominence by reaching the fourth round in her first Grand Slam singles appearance.

“Going back to around 2017-18, I was struggling to figure out if this was really what I wanted,” Gauff said. “I always had the results, so that wasn’t the issue. I just found myself not enjoying what I loved. I realized I needed to start playing for myself and not other people. For about a year I was really depressed. That was the toughest year for me so far.”

Gauff’s use of the term “depressed” set off a flurry of headlines and evoked memories of earlier teen tennis phenoms, like Jennifer Capriati, who struggled with depression and the effects of fame at an early age.

But in a telephone interview after the post appeared, her father, Corey Gauff, said that fame was not the problem and that depression was not the proper characterization of his daughter’s issues.

“That’s the thing that was alarming, and I knew that was going to be the word that got picked up,” said Corey Gauff, who is one of Coco’s coaches. “She was never clinically depressed, never diagnosed with depression, never seen anybody about depression.”

“There’s no medicine going on,” he added. “This is a kid’s personal pressure that they put on themselves and how they deal with it and how they mature.”

Coco Gauff, who is staying at home in Delray Beach, Fla., with her parents, Corey and Candi, and her two younger brothers during the coronavirus pandemic, was not made available for further comment by her family.

The “Behind the Racquet” series has often focused on players’ psychological and physical struggles in a Darwinian individual sport that provides an excellent living for only the top players.

Rubin, who interviewed Gauff by telephone before writing the post, said he had made an error in judgment.

“It’s completely my fault that I didn’t go deeper into what she meant by depressed,” Rubin said Friday. “I feel she was definitely sad and lost and questioning tennis at periods in the past. We spoke for about 30 minutes, and she sounded very honest. But the word ‘depression’ is a trigger word, and people start questioning things.”

Rubin said he had sent a copy of the post to Gauff to be edited and that she had approved it.

“I could have said, ‘Hey, people throw that word around, so did you see a professional for this, or did you just feel deep sadness?’” Rubin said of using the word “depressed.”

Coco Gauff, who shared the reflection on Instagram, said in her post that she had once considered taking a year off “to just focus on life.”

“I was confused and overthinking if this was what I wanted or what others did. It took many moments sitting, thinking and crying,” Gauff said. “I came out of it stronger and knowing myself better than ever.”

Corey and Candi Gauff said the difficult year described in the post began when Coco was 13, after she had reached the final of the 2017 United States Open junior tournament. She was the youngest girls’ singles finalist in the tournament’s history.

Candi Gauff said that the success generated tension with some of the older girls on the junior circuit.

“That led to loneliness at the tournaments, which leads to sadness, so for a period of time she was unhappy,” Candi Gauff said in a telephone interview Saturday. “I don’t want to say the word ‘jealousy,’ but it was a spirit of, ‘Why is this young girl winning?’ So she was isolated.”

Candi Gauff also said that Coco, who has been home-schooled since third grade, got social-media accounts for the first time at age 13, which made her realize what she was missing by not attending a traditional school.

“You are seeing other kids posting photos of going to these high-school events, and you’re wondering what would life be like if I didn’t play tennis,” Candi Gauff said.

After losing in the first round of the Australian Open girls’ event, Gauff took a break from the junior circuit during the first half of 2018, and Corey Gauff, a former college basketball player, said he also toned down his coaching. “I still like the command control style, where I say, ‘Jump,’ and you say, ‘How high?’ But that doesn’t work with your daughter,” he said with a laugh.

“I am grateful my wife and her were able to work through this when she was 13 and 14, with her feelings and playing tennis and going to high school, how she wanted to dress and look,” Corey Gauff said. “And I’m grateful she was open to talk to her mom about it, because a lot of times teenagers turn to drugs or other people or alcohol or something else to kind of deal with this uncertainty in their life in this period. And fortunately for us she didn’t.”

The Gauffs said their daughter also struggled early last year while adjusting to the professional tour, where she played a limited number of events because of her age and felt pressure to maximize each opportunity.

Both parents said a turning point came after she lost in the first round of a lower-tier WTA event in Bonita Springs, Fla., last May.

“What I saw was somebody who was emotionless and who was going through the motions of playing tennis,” Candi Gauff said. “After that match, I had a long conversation with her, and I said: ‘If you are not happy with what you are doing, you do not have to do it, but what you have to do is try. If you are going to go on court, you must try because your dad is not sacrificing his time away from his other children for you not to try.’ I also told her she could stop playing tennis right now, but that she must do some other sport. That is not negotiable in our household.”

Candi Gauff, an elementary schoolteacher who was a collegiate track and field athlete, remembered that Coco said little at the time but that she soon made a big change in her on-court attitude. With the help of other coaches, including Nick Saviano and Jean-Christophe Faurel, Gauff worked her way out of her funk and honed her game before making her stirring debut at Wimbledon.

She became the youngest singles qualifier at Wimbledon in the Open era and then became a sensation by defeating Venus Williams in the first round of the main draw. Gauff ultimately reached the round of 16, displaying an expressive, often exuberant approach to tennis combat.

“When I saw my child at Wimbledon, it was like she was finally releasing and being the person who she was meant to be, and accepting her uniqueness and talent,” Candi Gauff said.

Now, after winning her first tour singles title in Linz, Austria, in October, Coco Gauff is ranked No. 52 in the world. With the WTA Tour shut down because of the pandemic, she is studying French with a tutor and pursuing her usual online studies while her brothers, Codey, 12, and Cameron, 6, discover home schooling.

Gauff is also doing fitness training daily and practicing several times a week with her father and Faurel on a private court in Delray Beach. Her mother has been watching.

“Because of Covid-19, all it has done is give us more time to fix things that need to be fixed,” Candi Gauff said. “So the forehand that everybody was concerned about, they better watch out, because that’s going to be the weapon.”