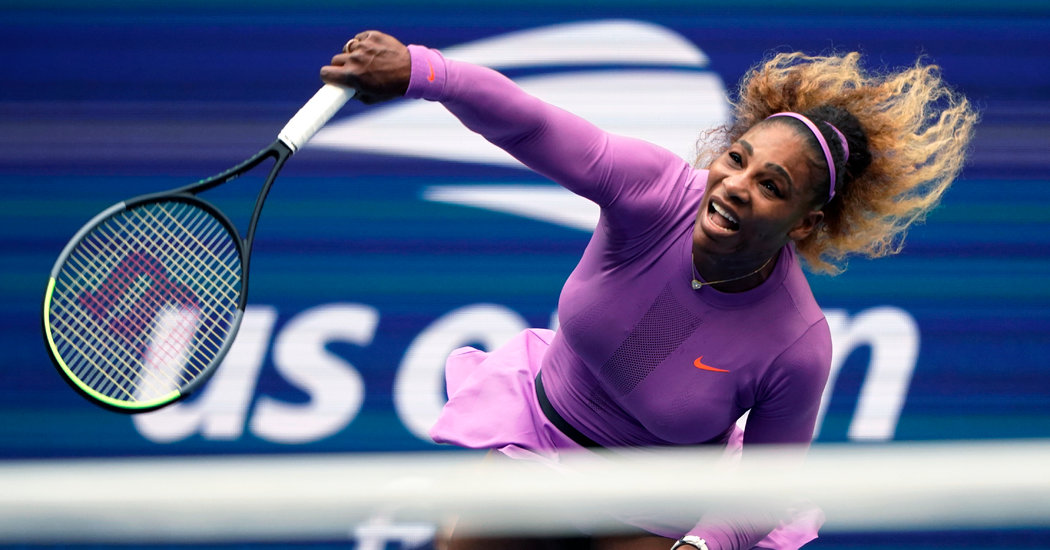 As the tennis tours laid out their road maps on Wednesday for a return to play in August, Serena Williams confirmed her desire to be a major part of those comeback plans and to play in this year’s United States Open.

“Ultimately I really cannot wait to return to New York and play,” she said in a video message. “I feel like the U.S.T.A. is going to do a really good job of ensuring everything is amazing and everything is perfect and everyone is safe.”

Her announcement was welcome news for the Open, a Grand Slam that is unlikely to draw a full-strength field this year without spectators on site and with extraordinary health and safety measures because of the coronavirus pandemic.

“I’ll certainly miss the fans, don’t get me wrong,” said Williams, still ranked No. 9 in singles at age 38. “Just being out there in the New York crowd, hearing everyone cheer — I’ll miss that, getting me through some of those tough matches.”

Williams, of course, has not always heard cheers at the U.S.T.A. Billie Jean King National Tennis Center. Her relationship with the tournament where she has won six of her 23 major singles titles has been full of soaring high notes but also discordant passages, like the rancorous 2018 singles final in which she lost to the upstart Naomi Osaka after clashing with the chair umpire, Carlos Ramos, and receiving three code violations.

Williams’s announcement was a part of a United States Tennis Association videoconference on Wednesday to formally announce plans for this year’s tournament, which has been confirmed to be held from Aug. 31 to Sept. 13 and is in undeniable need of star power.

Roger Federer is out because of knee surgery, and the top two singles players on the men’s and women’s tours — Novak Djokovic, Rafael Nadal, Ashleigh Barty and Simona Halep — all have expressed initial reluctance to commit.

“I would be surprised if it’s 100 percent,” Steve Simon, head of the WTA Tour, said of the women’s field. “I think their positions will evolve based on what’s happening in the world. Some will be comfortable with it; some will not. No one is forcing anyone to play.”

But an aging Williams trying to tie Margaret Court’s record 24 Grand Slam singles titles remains an irresistible story line at the U.S. Open. And the U.S.T.A.’s increasingly flexible approach to permitting players to travel to New York with more than one team member and stay in private housing has certainly made it easier to commit for Williams, who typically travels with her family, including her daughter, Olympia, and her staff.

John Isner, the top-ranked American men’s player in singles at No. 21, also is intent on playing. “I think it’s important for sport to get back and this is a good opportunity to get tennis back in the mainstream,” he said in a text message.

Williams has played just two WTA tournaments since losing in last year’s U.S. Open final to another youngster, Bianca Andreescu of Canada. But Williams is back in training, and Stacey Allaster, the U.S. Open’s new tournament director, confirmed on Wednesday that Williams had even had a court with the Open’s new hardcourt surface constructed at her Florida home.

A perquisite for a star? Certainly, but it is not unheard-of for leading players to train in private on a Grand Slam surface. Martina Hingis, the former No. 1, had a Rebound Ace hardcourt installed at her home in Switzerland during her heyday to prepare for the Australian Open.

The men’s and women’s tours have been on hiatus since mid-March because of the pandemic. Though tennis is particularly suited to social distancing with a net separating players, the global nature of the professional tours is a major obstacle. Though no schedule can be definite at this anxious stage, both tours announced their comeback plans on Wednesday.

The women’s tour is set to resume on Aug. 3 with a clay-court event in Palermo, Italy, followed by potential tournaments in Prague and Washington. Then it would continue to the doubleheader in New York with the transplanted Western & Southern Open preceding the U.S. Open from Aug. 21 to 28.

The men’s tour would resume with the Citi Open in Washington on Aug. 14 with the New York doubleheader to follow.

After the U.S. Open, both tours would head to Europe for the postponed clay-court season with combined events in Madrid and Rome and then the French Open, a Grand Slam tournament that was rescheduled from late May to Sept. 27 to Oct. 11.

Unlike the U.S. Open, the Madrid Open and French Open could be played with spectators. Mark Ein, who owns the Citi Open in Washington, has also not ruled out having a restricted number of fans. He said the tournament would undoubtedly operate at a loss this year, but maintained that it was worth the sacrifice.

“I have often asked myself, ‘Why are we doing this?’” he said. “I just think it’s been such a hard year in our world and our community. I think this is something people will look forward to. It’s a real honor to have this opportunity, but it’s also a big responsibility.”

Ein said the Citi Open, like the U.S.T.A. in New York, would create a controlled environment for players and staff with frequent testing and limited numbers of people permitted on site to reduce the risk of infection. Ein said players would travel independently from Washington to New York, just as international players are expected to arrive independently in the United States.

U.S. Open officials indicated that instead of using tracking or security measures they are counting on players being judicious enough not to venture outside the bubble and jeopardize the health of others involved in the tournament.

“If they do become infected, the way the inner bubble is, they will not be in physical contact with any of the other players,” Brian Hainline, a U.S.T.A. vice president, said of the planned social distancing measures. “If someone does test positive during the tournament, we’re confident that disease won’t spread to the other players because of how everything has been worked out and modeled.”

Both tours have struck deals with tournaments to reduce prize money this season to compensate for the expected loss of revenues from ticket sales and sponsorships. Simon said the reductions on the WTA Tour ranged from 18 percent for low-level international events to more than 32 percent for top-tier Premier Mandatory events like Madrid. The men’s tour will flip that model, with its Masters 1000 events making smaller prize money reductions proportionally than lower-tier events.

Simon said if the provisional schedule holds true, the WTA Tour will have managed to play about “60 percent” of its original 2020 calendar.

Both tours are also intent on preserving their tour finals — the ATP’s in London and the WTA’s in Shenzhen, China — which represent a major chunk of their revenue.

“If we can play the finals this year, we’ll be in a much better position than if we don’t,” Simon said. “But either way, like everybody else, we’ve been hurt this year significantly.”