UEFA will hold a crisis conference call with its 55 members on April 1 to discuss Champions League dates, transfer window and player contracts.

European football – just like sport across the globe – is currently on hold due to the coronavirus pandemic, with Spain and Italy the countries feeling the affects hardest.

Read our coronavirus live blog for the latest news & updates

But the governing body for Europe are keen to try and get a plan in place so they are ready once football is able to resume again.

A statement read: “Uefa has invited the general secretaries of its 55 members associations to a videoconference on Wednesday 1 April at midday to share an update on the progress made by the two working groups that were created two weeks ago and to discuss options identified with regards to the potential rescheduling of matches.

“The meeting will look at developments across all Uefa national team and club competitions, as well as discussing progress at Fifa and European level on matters such as player contracts and the transfer system.”

Uefa’s flagship tournament – the European Championships – has already been pushed back by one year so will be staged in the summer of 2021 instead.

But the organisation will be sweating over this season’s Champions League.

The last-16 ties are yet to be completed for either tournament with the likes of Manchester City, Barcelona, Bayern Munich and Juventus all hopeful of booking their place in the quarter-finals.

Uefa originally put the final of the Champions League – as well as the Europa League – back a month to the end of June but have now decided to postpone indefinitely. 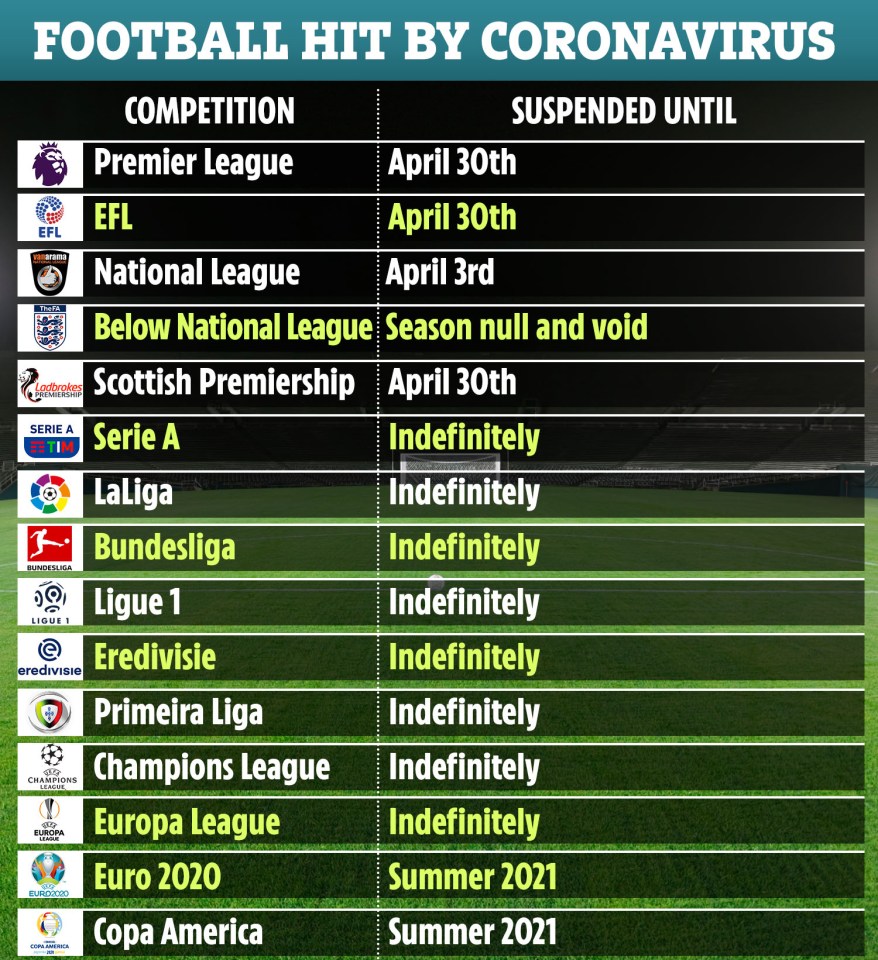 There were also suggestions that there could be major shake-ups to the way the closing stages of the two competitions are completed.

One included the idea of having one-leg quarter-finals and semi-finals while another posed the prospect of a mini-tournament where the semis and final are played in one city across a few days.

Elsewhere, it was touted that European ties could even be played on weekends with exclusivity slots abolished to get the season completed.

They will also try and reach a solution with the transfer window and player contracts.

Footballers’ contracts run from July 1 to June 30 and therefore plenty of stars are set to be released when their deals expire in three months’ time.

Meanwhile, players who have signed pre-contract agreements will officially join their new clubs on July 1.

Get the latest coronavirus news, facts and figures from around the world – plus essential advice for you and your family.

To receive our Covid-19 newsletter in your inbox every tea time, sign up here.

At Chelsea, for example, Willian and Pedro are on course to leave the club at the end of June while Hakim Ziyech should arrive from Ajax at the beginning of July.

However, if the 2019/20 season goes on beyond that June 30 cut-off date, it gets very confusing and therefore Uefa need to work out exactly what should happen in that situation.

Similarly, the transfer window usually opens on July 1 and closes at the end of August but, again, if the current season is still going on by that point, they must work out when clubs can start trading and also when they must get their business done.