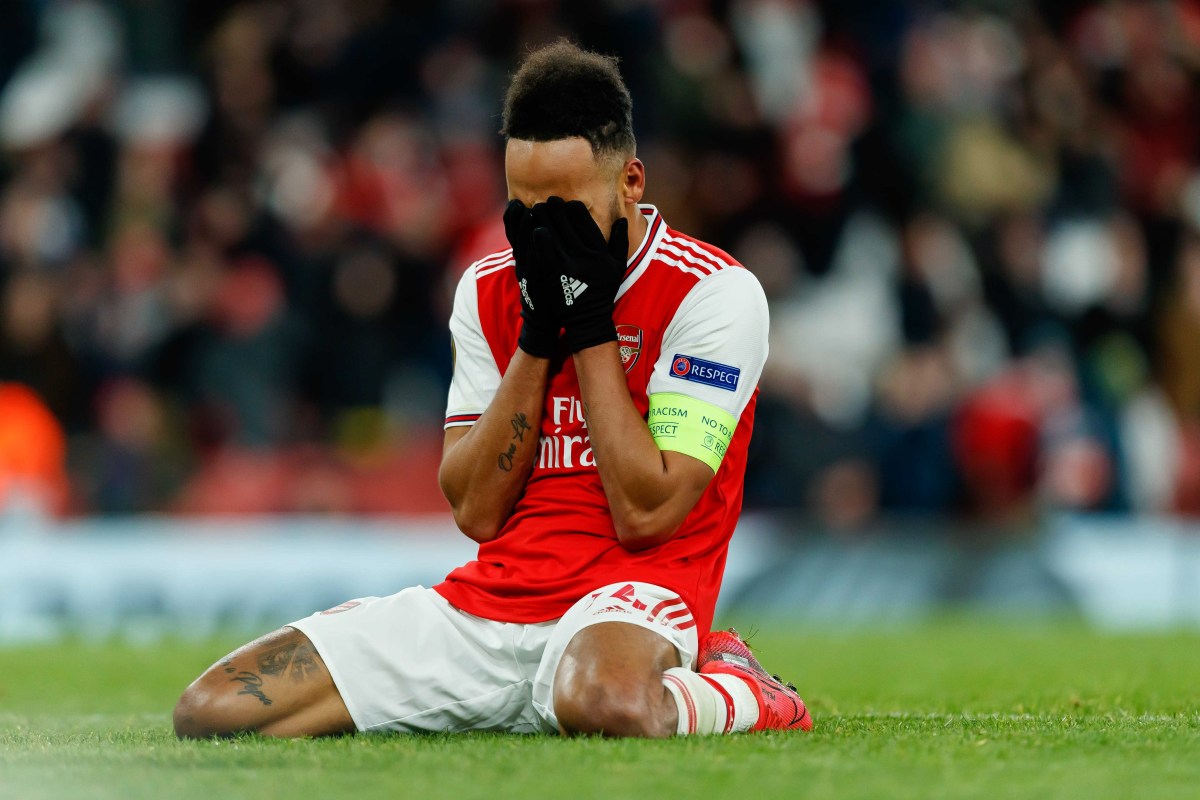 ARSENAL star Pierre-Emerick Aubameyang was left distraught after missing a potential winner in the last seconds of their defeat to Olympiakos last night.

The Greek side grabbed a late winner to send them through on away goals after Arsenal’s 1-0 win in the first leg.

Aubameyang thought he had done enough to send Arsenal in to the last-16 of the Europa League after grabbing an equaliser in extra-time but it wasn’t to be for the striker as Youssef El-Arabi snatched a dramatic winner.

The Gabon international was left lying on the pitch with not a teammate in sight to console the club’s top scorer.

Yesterday’s defeat could cause major problems for the club.

Arsenal could be forced to pay back season-ticket holders due to their lack of cup games.

If Mikel Arteta’s side lose to Portsmouth in the FA Cup on Monday, the club will have to offer fans a rebate for two games.

It could mean the Gunners may have to re-pay nearly £4.5million as a result of their poor performances in cup competitions.

Arsenal’s failure in the Europa League could have a major effect on their summer transfer business with the club set to be £60m worse off than England’s four Champions League contenders this year.

Arteta is keen on a rebuilding his squad but it could prove more difficult than first thought if the club aren’t playing European football next season.

Jonathan Tah, Dayot Upamecano and Jonathan David have all been targeted as the Arsenal boss prepares for his first pre-season with the club.

The Gunners are currently ninth in the Premier League, three points off the Europa League qualification places.

Arteta and his players will now have to turn their attentions to the FA Cup as they look to save their season with the only chance of silverware left remaining for them.

It has been a poor season by their standards but success in the cup could give the Gunners fans some optimism heading into next season.

After the visit to Fratton Park, Arteta’s side face West Ham, Brighton and Southampton as they aim to break into the top six after what has been an underwhelming season so far.