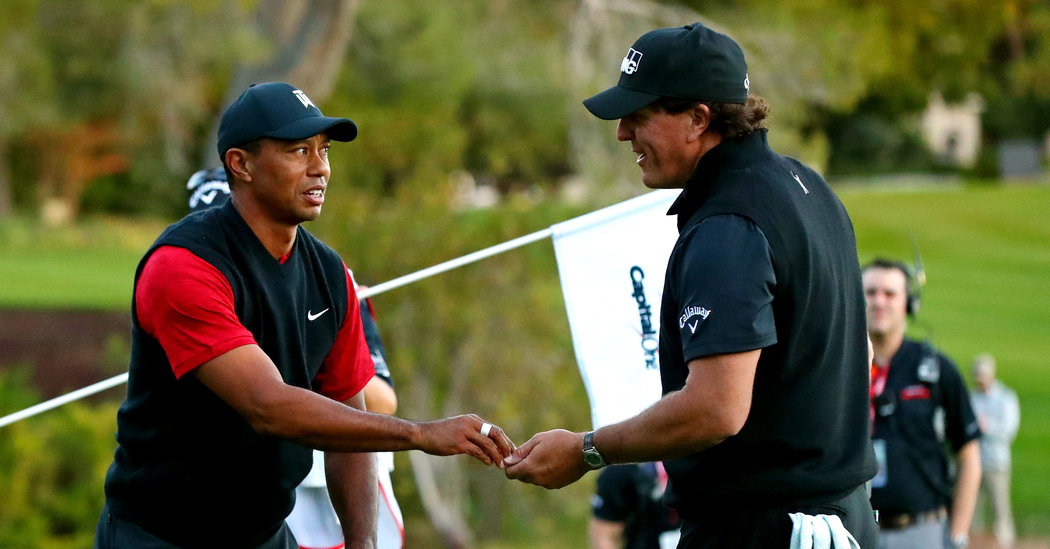 A televised charity golf match between Tiger Woods and Phil Mickelson, who will be joined in the contest by Tom Brady and Peyton Manning, is planned for next month, Turner Sports announced on Wednesday.

The location of the event was not disclosed, and a spokesperson for the PGA Tour, which would need to approve the competition for Woods and Mickelson to participate, said discussions were continuing about the safety of staging such a match during the coronavirus pandemic and about other logistics.

It is expected that the event, which is to air live on TNT, will be held without spectators, and golf courses in Florida have been discussed as possible sites, according to people with knowledge of the deliberations who were not authorized to speak publicly about them.

Gov. Ron DeSantis of Florida said last week that he supported the return of sports contests during the pandemic and mentioned a potential Woods-Mickelson match.

“I’d like to see Woods and Mickelson do the golf, or whatever, because that’s social distance,” DeSantis said. “You wouldn’t have a gallery there. You wouldn’t have crowds. But to put that on TV, I think people have been starved for content.”

All money raised in association with the competition — which is titled “The Match: Champions for Charity” — will be donated toward Covid-19 relief, Turner Sports said.

The event will feature two-man teams, although the pairings were not announced Wednesday. Shortly after the Turner Sports announcement, Mickelson sent Twitter messages to Woods and Brady that read, “It’s on now.”

The parameters of the competition — several kinds of match-play formats could be used — also were not revealed. A specific date in May for the event will be announced in coming weeks, said Turner, which added that it was in conversations with state and local governments and public health officials.

In 2018, Mickelson beat Woods in a winner-take-all, $9 million pay-per-view match in Las Vegas. The event was marred by technical issues that resulted in many paying customers being locked out of the broadcast while others received it for free.

Brady and Manning, two of the greatest players in N.F.L. history, are both accomplished golfers, and Manning has played with Woods during exhibitions.

The PGA Tour suspended its season on March 13, just after canceling its signature event, the Players Championship, following the first round.

The tour recently released a revised schedule in which tournament play would resume June 11 with the Charles Schwab Challenge at the Colonial Country Club in Fort Worth. That tournament and three more PGA Tour events in subsequent weeks would be played without fans.

The rest of the competition schedule is to continue throughout the year, including the rescheduled men’s major championships — the P.G.A. Championship in August in San Francisco, the United States Open in September in Westchester County, N.Y., and the Masters in Augusta, Ga., in November. A biannual international competition, the Ryder Cup, is scheduled for late September in Wisconsin.

The tour, however, has conceded that multiple obstacles must be cleared — including the establishment of widespread coronavirus testing for participants — before any of those events can take place.