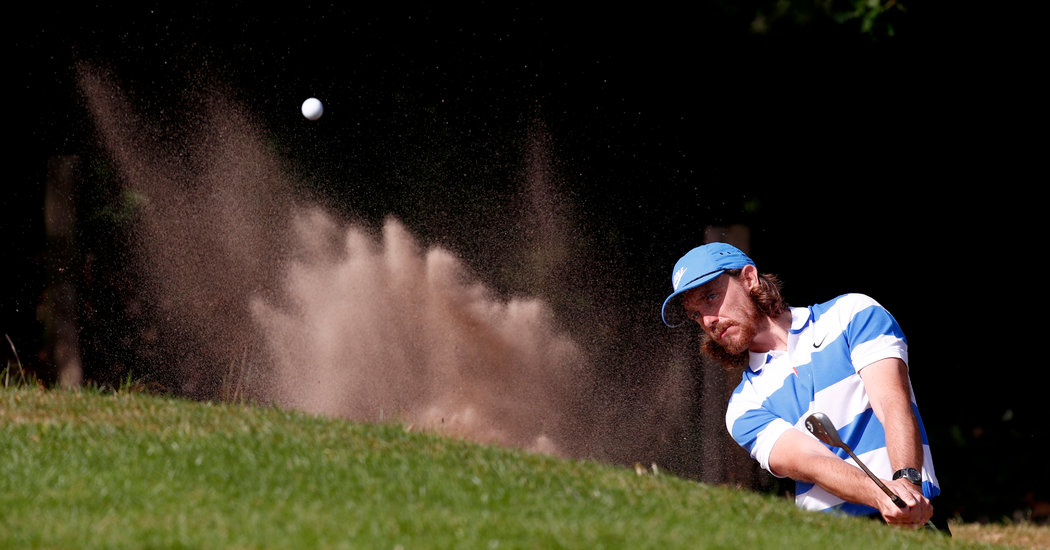 England’s top player, Tommy Fleetwood, was the world No. 10, one spot ahead of Tiger Woods, when the PGA Tour suspended its schedule in March. With four top-3 finishes in his seven worldwide starts before the coronavirus halted the season, Fleetwood had momentum on his side. But when tour play resumed last week, he was on the wrong side of the Atlantic.

In its haste to return, the tour, whose playing membership spans the globe, set up the stakes so that any player not based in the United States was effectively out of bounds. From Fleetwood’s perch in northwest England, the hazards were many, including a two-way quarantine, the possibility of catching the virus from a fellow passenger on a trans-Atlantic flight, and a months-long separation from his wife, Clare; their two-year-old son, Franklin; and his stepsons Oscar, 13, and Mo, 12.

“If I was living in America,” Fleetwood said, “I’d be playing right now.” But he doesn’t, and so he is not.

Golf is not the only sport that has forged ahead without the full support of its competitive membership. This week’s decision by the United States Tennis Association to hold its marquee event, the United States Open, later in the summer in New York, one of the cities hardest hit by the virus, drew a sharp rebuke from the Australian player Nick Kyrgios. On Twitter, Kyrgios described the move as “selfish” and wrote, “People that live in the U.S. of course are pushing the Open to go ahead.”

He added, “I’ll get my hazmat suit ready for when I travel from Australia and then have to quarantine for two weeks on my return.”

Kyrgios’s countryman Adam Scott, a former major winner, was the only player in men’s golf based outside the United States other than Fleetwood in the top-10 when the season was suspended. He also struggled with the idea of a restart, and some of his concerns were validated on Friday when Nick Watney, an American player, withdrew before the second round of the RBC Heritage in South Carolina after testing positive for the coronavirus.

Watney had tested negative at the start of the week as a condition of entering the tour’s so-called bubble and playing this week.

In an interview last month with an Australian news service, Scott, who is married with young children, expressed reservations about the tour’s testing protocols. He worried about contracting the virus from an asymptomatic player, and of triggering the nightmarish — for him — possibility of having to ride out the illness in self-isolation in a strange city, far from his family.

Scott, 39, said that he is not likely to return to the tour until late July, at the World Golf Championships event in Memphis. That is one week earlier than the Italian star Francesco Molinari, who was in the process of relocating his family from London to the United States when the lockdown began. The closure of most government offices prevented him from completing the embassy paperwork he needed to finalize the move.

Molinari, 37, now fully recovered from a back injury that kept him from defending his title at the Arnold Palmer Invitational in March, expects his next tour start to be the year’s first contested major, the PGA Championship in San Francisco.

Fleetwood, who has been in regular contact with Molinari over the past three months, also decided to sit out the restart. Instead, he will turn his PGA Tour return next month into an extended family summer vacation. With his wife and sons in tow, Fleetwood will travel to New York in mid-July, and after a two-week quarantine, rejoin the tour for the World Golf Championships. He plans to stay in the United States through the end of September.

Fleetwood said he initially questioned the ethics of athletes’ jumping to the front of the line for coronavirus testing, leapfrogging essential workers.

As testing has expanded, though, that concern has subsided, but the health and well-being of his family remains a primary concern. His stepson Oscar has Type 1 diabetes, putting him at more risk if he were to be infected with the coronavirus.

Fleetwood said he could not imagine a situation in which he would leave his family behind for three months to fend for itself while the pandemic has not run its course.

““There are no easy answers when you live outside the United States,” said Fleetwood. He said he was mildly frustrated that the official world rankings, which were frozen in mid-March, were unlocked when the PGA Tour restarted, especially while other tours whose players are represented in the rankings remain suspended.

Fleetwood stands to lose money in sponsors’ performance bonuses as his world ranking falls, but he said that would not alter his decisions.

“My ranking drop doesn’t affect me as much as someone who’s trying to stay in the top-50 or top-100,” he said. “Golf is more than the PGA Tour, and the players on the other tours are the ones who are really affected.”

Lee Westwood, a former world No. 1, had dropped outside the top-70 last July, then soared to No. 30 on the strength of a victory in Abu Dhabi in January. Because he still has reservations about leaving his home in Britain to rejoin the tour, Westwood, 47, is backsliding in the rankings, which play a role in filling the tournament fields in the most prestigious events.

“I’m not very keen on flying at the moment, especially to the States, where they seem to have adopted a more relaxed approach to tackling the virus,” Westwood said in an interview with the daily golf newsletter Morning Read. “Our rules over here seem far tighter.”

Not every player is concerned about the consequences of caution, however. Rory McIlroy, the Florida-based world No. 1 from Northern Ireland, expressed little sympathy for his fellow Europeans who are being displaced as part of the pandemic’s tectonic shifts.

“If you really care about your career and care about moving forward, you should be here,” McIlroy said Wednesday during a virtual news conference from this week’s Tour stop, the RBC Heritage.

But what about his fellow Europeans with young children, whose paths are not as straightforward?

“I get there’s variables, families involved,” McIlroy said. “We all have the means to rent a very nice house in a gated community in Florida and it’s not a hardship for two weeks to come over and quarantine.”

He added: “You can bring your family with you. We all have the means to do that. It might seem a little harsh but I don’t get that mind-set, especially if you care about your career and want to advance.”

From 4,000 miles away, Fleetwood stood his ground. Yes, golf is important, he said, “but family comes first.”