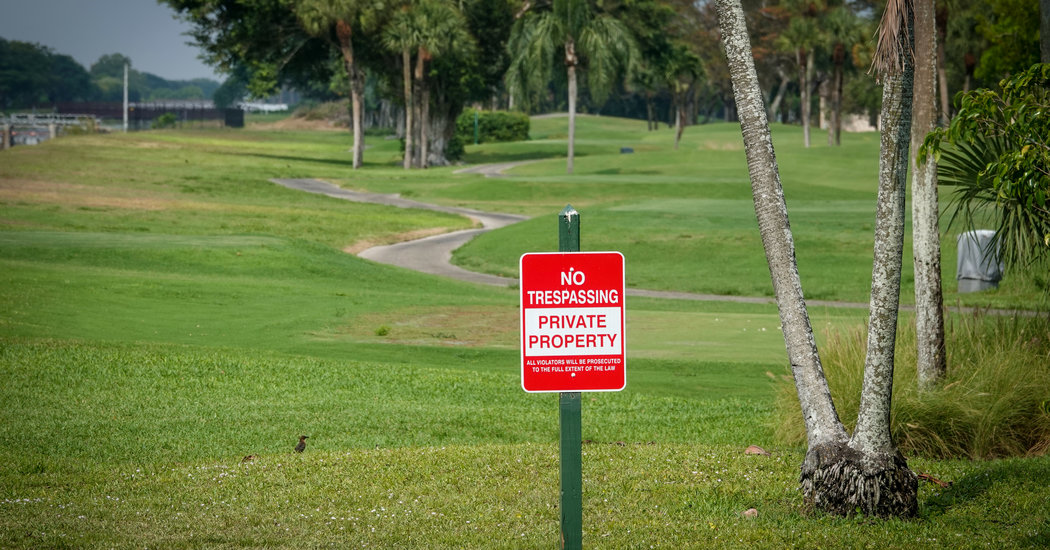 DELRAY BEACH, Fla. — The 18 holes of the Boca Delray Golf and Country Club have been closed since late March, when administrators of Palm Beach County, Fla., decided to shutter every business and activity deemed nonessential.

Apparently, some members didn’t get, or didn’t like, the message.

“People have called to let us know that they’ve seen players on the course,” said Michelle LaDouceur, the club’s property manager. “We don’t have 24-hour staff here, and no security cameras, either. So if people are out there playing, we have no way of knowing about it and no way of policing it.”

Add this to the list of cultural phenomena produced by the pandemic: renegade golfers. With about half the nation’s courses closed by state or local leaders, and with the weather turning to spring, a few million hard-core golf fans are struggling to restrain themselves. Many are failing.

“My wife’s not thrilled that I’m out here,” said Ira Lipshutz, 74, who was chipping balls with a friend at the Westchester Country Club in Boynton Beach, Fla., on Wednesday. “She’s much more cautious than I am.”

Nearby, Diane Koltun got out of a Lexus and headed to the greens with two golf clubs pinned under an arm.

“I think this is fine,” she said, blocking the sun with her free hand. “We’re walking around, getting some fresh air.”

Westchester, a public course, appeared to lack any kind of “Get Lost” signs or locked gates. But course managers across the country have put up yellow caution tape, posted “No Trespassing” warnings and removed pins, rakes and tee markers.

It doesn’t matter. A group of golfers in York, Pa., ignored the tape and played until police arrived and shooed them away. Officers have also been dispatched to greens in Brockton, Mass. In New York City, police have escorted more than 300 golfers off public courses in Staten Island, Brooklyn and Queens. Five players have been issued $50 summonses for trespassing.

“We all have to make sacrifices for the greater good health of our nation,” said Crystal Howard, a spokeswoman for New York City Parks. “That includes shutting down courses for the time being.”

The golf pause has been a source of special irritation in the Sunshine State, a haven for retirees who migrated for low taxes, great weather and golf. Two out of three will not suffice.

The sport is actually allowed under Gov. Ron DeSantis’s original “stay-at-home” order, but leaders in Palm Beach, Miami-Dade and Broward Counties superseded that mandate with their own. (That is because the counties are in Southeast Florida, home to roughly 55 percent of the state’s Covid-19 cases, according to the governor’s office.) The state has since become a land of golf haves and have-nots.

For a while, the have-nots searched online for options and traveled to open greens. Gradually, that option disappeared. Most recently, Martin County, a 45-minute drive from West Palm Beach, issued rules that restrict play on its courses to members and residents. No outsiders allowed, even family.

Golf lovers in the three golfless counties have since been agitating on the sport’s behalf. In Palm Beach County, the most furious have circulated the mobile phone number of Dave Kerner, the county mayor, who announced the shutdown, and pelted him with calls.

“There is also a small contingent that has called or texted my parents and said, ‘Tell your son to open the golf courses,”’ Mr. Kerner said in a phone interview. (That’s the expletive-free version of the message.) “I understand the anger. I am a 36-year-old mayor that no one has ever heard of and I was the one to close golf in the golf capital of the universe.”

Those taking a more civil approach include Scott Eckert, a golfer in Boca Raton, who drafted an online petition urging Mr. Kerner and other Palm Beach County administrators to change their minds. It now has more than 8,000 signatures.

“To me, it’s pretty questionable that they can continue to keep courses closed,” Mr. Eckert said in an interview on Sunday. “There is a Bill of Rights, and our civil liberties have been trashed.”

One of the signatories to the petition is Jack Doyle, a former Wall Street executive who has built a 1,000-square-foot practice green in his front yard, complete with sand traps.

“I’m able to get a little bit of a golf fix in every day,” he said by phone from his home in Manalapan, a town in Palm Beach County.

Like many other golf fans, Mr. Doyle thinks it was shortsighted of government officials to prohibit an activity that is not just beloved but safe, when done with proper care.

“You’re outside, in the sunlight, in fresh air. You can keep a social distance from everyone while still being able to get some exercise and maintain relationships,” he said. “To have that taken away is a damn shame.”

Idled golfers may seem low on any list of tribulations caused by Covid-19. But owners and managers of both public and private courses are suffering, too. Many were coping with falling revenue before this crisis. The number of golfers in the United States peaked in 2003, with 30 million players, according to the National Golf Foundation, and is now about 24 million. Thanks to dwindling demand, and overbuilding during the housing boom, the number of golf courses that close each year (about 150) now far surpasses new openings (about 20).

Golf courses aren’t expecting an outpouring of sympathy. The public perception of the industry is reflected in its inclusion on what is informally known as the Internal Revenue Service “sin list,” a group of enterprises that are blocked from all sorts of government initiatives, including disaster relief. Others on the list include massage parlors, racetracks and hot tub facilities.

So far, there’s been no reference to the sin list in any of the coronavirus programs passed in Washington. But Jay Karen, the chief executive of the National Golf Course Owners Association, says he and his colleagues are on alert.

“There’s a bias against the game and the business of golf, and it’s patently unfair,” said Mr. Karen. “The feeling is that golf courses are owned by a bunch of rich guys, which is a very old narrative that no longer holds true.”

Nationally, 80 percent of golf is played on what are known as public courses, Mr. Karen added. In terms of revenue and payroll, these are businesses roughly the size of a typical restaurant. Unlike most restaurants, though, golf courses are outdoors. They would have a reasonable chance at survival, supporters say, if they were allowed to stay open.

“It’s a game that is played in what is essentially a 200-acre park, with a maximum of 70 people in the park at a time,” said Steve Skinner, the chief executive of KemperSports, which manages 130 golf courses. “That’s more than two acres per person.”

To Peter Weiss, the mayor of Oceanside, Calif., that seems like ample space. He had hoped all courses in the city would stay open, despite Gov. Gavin Newsom’s stay-at-home order. But in late March, the last holdouts attracted enough players, and media attention, that health officials ordered them closed the next day. As a courtesy, the mayor called to give the courses a heads up — and to see if they had any tee times for a final round.

One did. “It was one of my better golf experiences, honestly,” Mr. Weiss said. “And it didn’t feel crowded. There’s more people at a Trader Joe’s.”

Mr. Weiss has now joined the great mass of sidelined golfers. These are people dealing with something akin to withdrawal, says Alan Shapiro, a psychologist and the author of “Golf’s Mental Hazards.” In a typical round, he says, even good golfers hit just a handful of superb shots, and they’re rare and exhilarating enough to yield a mood-altering rush. It’s difficult to know when that rush will occur, which means golf offers what’s known as “intermittent reinforcement,” a jolt of joy the timing of which can’t be predicted.

“That moment of glory is something that golfers jones for, like gamblers at a slot machine,” said Dr. Shapiro. “Now what are you supposed to do? Read a book? Spend time with the family? Those things are nice, but they’re not like nailing a 7-iron right at the flag stick.”

Some golfers were unwilling to surrender the game’s mental buzz without a fight. When Palm Beach County issued its shutdown order, a few private clubs decided that the rule did not apply to them.

“We rectified the language of the order so that it was clear that it applied to all courses,” Mr. Kerner said. To make sure the message got through, “There were two or three courses that the sheriff or one of his colleagues needed to visit and educate in a professional manner,” he said.

Mr. Kerner said that he hoped to reopen golf courses late next week but admitted that the time frame was “aspirational.”

Whenever the greens are again filled with people, don’t expect to find Mr. Lipshutz at the Westchester Country Club, or any other course, for that matter. The moment that the county decides it’s safe to golf is the moment he will stop golfing during the pandemic.

“There will be a lot of players here,” he said, “and unfortunately, not everyone is as careful as I am.”