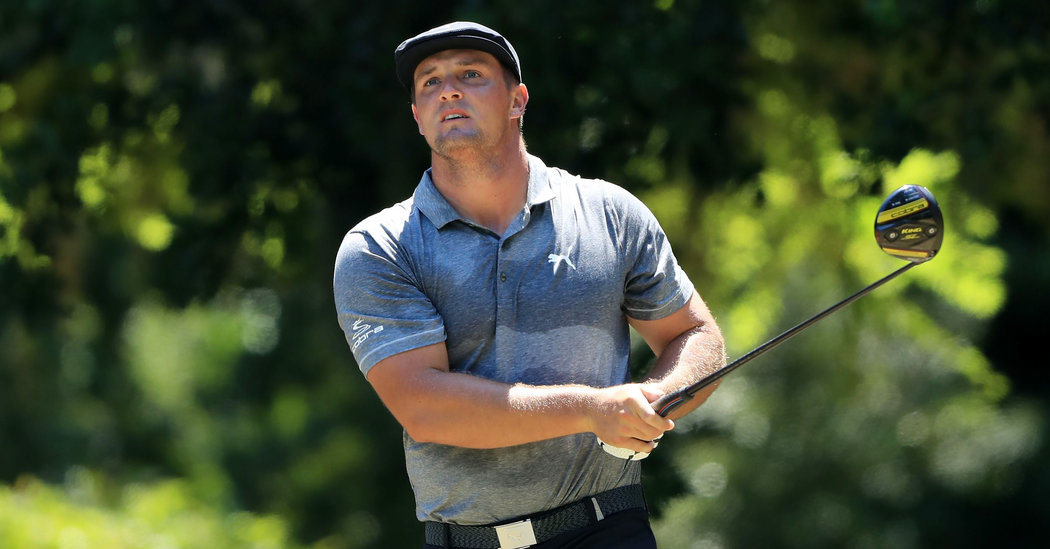 When Bryson DeChambeau arrived on the PGA Tour four years ago as the reigning United States amateur champion, all anyone wanted to talk about were his many eccentricities in the sport.

A physics major in college at Southern Methodist, he was barred by rules officials from using a protractor during rounds to accurately determine hole locations and he would soak golf balls in Epsom salts to determine their center of gravity. DeChambeau signed autographs backward with his left hand even though he is right-handed.

“I’m a total nonconformist; for me, it’s about going down rabbit holes,” DeChambeau said in a telephone interview Tuesday. “I have to chase down the most scientifically efficient way to get the golf ball in the hole.”

This year, DeChambeau, 26, is roiling the professional golf world with his gaudiest experiment yet.

In the last eight months, including 90 days when he was bored while isolating because the coronavirus pandemic put golf on a hiatus, DeChambeau threw himself into an extreme weight lifting routine that added 40 pounds to his physique, most of it in his upper body.

DeChambeau is now 240 pounds — the world’s top ranked player, Rory McIlroy, is listed at 160 — and routinely hitting drives 50 yards past the competition. His golf ball often travels at speeds approaching 200 miles an hour and he envisions drives regularly flying 400 yards. Last week, when he was hitting balls on a tournament practice range, he was forced to back up 15 yards because his shots were sailing over a mammoth net meant to protect an adjacent neighborhood of homes hundreds of yards away.

And DeChambeau is not done. He dreams of getting bigger and swinging harder during the next off-season.

“If I could get to 260 pounds and swing it upward of 210 miles an hour and control the ball, that would be amazing,” said DeChambeau, who is among the favorites at the Travelers Championship which begins Thursday in Connecticut.

It is a prediction that might put a fright in his colleagues who are already gobsmacked by what they have seen in the two weeks of tournaments since the PGA Tour resumed on June 11.

“It was crazy, it was nuts, it’s unbelievable,” McIlroy said, describing DeChambeau’s tee shots. “He hit it like 375 into the wind.”

This being golf, where the object is to knock a little ball into a hole roughly four inches wide, DeChambeau’s prodigious power has not yet translated to a victory this year, although he has four top-five finishes in his last five events. Accurate putting still remains an essential skill and a balky putter in the final round of the Charles Schwab Challenge in mid-June kept DeChambeau one stroke behind eventual winner Daniel Berger. A week later, DeChambeau also blamed a lack of touch on the greens for finishing tied for eighth at the RBC Heritage.

But with his superhero build, and quirky charisma, there is also a sense in the golf community that DeChambeau, who is ranked 11th in the world and has won five times on the PGA Tour, may be remaking the paradigm of a top golfer. Will the sport’s future players be shaped more like N.F.L. linebackers? And consequently, will the next generation of young golfers adopt heavy weight lifting regimens to mimic DeChambeau’s beefy frame?

Social media has already found a new nickname for a trending golfer: #DeChambeauFlex.

Does a similar fate await DeChambeau?

“I have a concern; I would look a little deeper into the safety of his swing,” said Joey Diovisalvi, who for two decades has trained scores of pro golfers — including one of the PGA Tour’s longest hitters, Dustin Johnson — in the biomechanics of the sport, “It’s important to understand what the effects are. Let’s make sure your body can handle that.”

Diovisalvi, who operates a golf training center in Jupiter, Fla., said he admired how DeChambeau has highlighted athleticism in golf but acknowledged that he had recently heard from many young golfers who wondered if DeChambeau’s regimen was worth pursuing.

“Lifting too many weights or having too much load or stress on tendons, ligaments or skeletal structure at an early age is dangerous,” Diovisalvi said. “You have to remember that Bryson is a grown man.”

DeChambeau insists he is carefully monitoring the demands that his golf swing imparts on his body with the aid of fitness specialists.

“We have a protocol that I go through to ensure that my back and body are OK,” said DeChambeau, who then recalled 2017 when he was ranked 99th in the world.

“I had debilitating back pain,” he said. “Three years later, I’m 40 pounds heavier and generating 20 or 25 miles an hour more ball speed. I’m as strong and as good as I’ve ever been. Clearly, something is working.”

In the end, however, DeChambeau concedes he is doing something familiar: chasing down another rabbit hole.

“And if I get bit in that hole that’s actually a good thing,” he said. “I’ll learn from it. Most people are afraid of failure. I love failure because it tells me where to go next.”