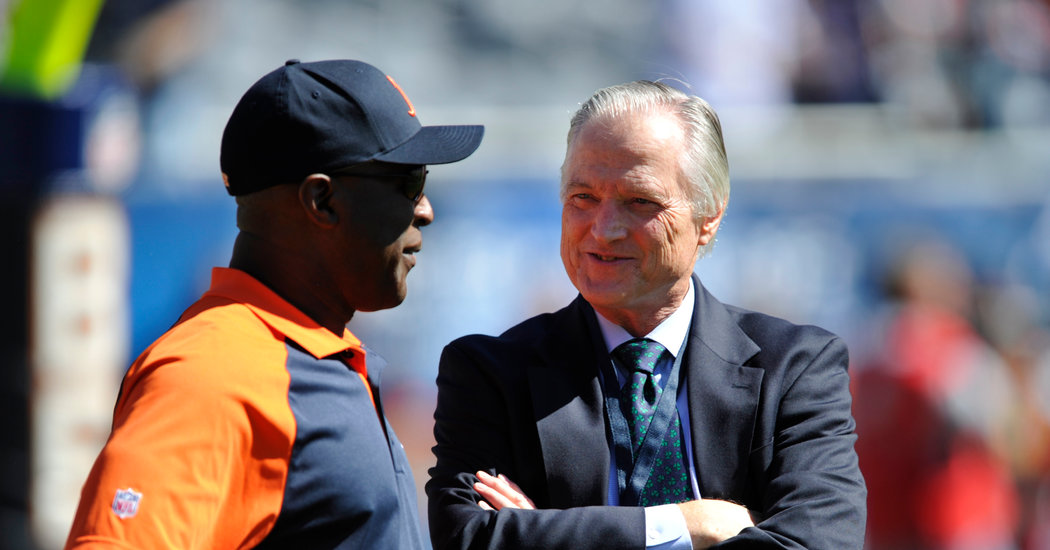 Michael B. McCaskey, who took over running the Chicago Bears from his grandfather George S. Halas and led the team during its 1980s heyday, when it won its only Super Bowl championship, died on Saturday. He was 76.

The cause was cancer, which he battled for years, the team said on its website. It did not specify the type of cancer or say where he died. In recent years he lived in Boston.

Mr. McCaskey was a professor of organizational behavior and management when Halas, the team’s founder, died in 1983. Mr. McCaskey’s mother, Virginia Halas McCaskey, took over as the team’s owner, and Michael joined the Bears as president and chief executive.

He oversaw a team that became known as the Monsters of the Midway, led by the running back Walter Payton, the quarterback Jim McMahon and the lineman William “Refrigerator” Perry. When the Bears won the Super Bowl championship in 1986, he was voted N.F.L. Executive of the Year. He called the Super Bowl XX victory, following a dominant regular 1985 season, when the Bears went 15-1, his proudest moment with the team.

Despite the team’s success in the 1980s, Mr. McCaskey often argued with Mike Ditka, the club’s outspoken head coach, who had been hired by Halas in 1982. The Bears’ continued success — double-digit wins in seven out of eight years through 1991 — allowed Mr. Ditka to keep his job. But after the Bears slipped to 5-11 in 1992, Mr. McCaskey fired him.

Mr. McCaskey’s handpicked successor, Dave Wannstedt, was far less successful. After making the playoffs in 1994, the Bears went into hibernation, failing to qualify for the postseason for six more years.

In 1999, his mother, the team’s principal owner, ended his run as the club’s top executive. During his tenure, the Bears qualified for the playoffs eight times and won six division titles. After stepping down, he replaced his father, Ed McCaskey, as the team’s chairman, a role he held until 2011, when one of his younger brothers, George, succeeded him.

While with the Bears, Mr. McCaskey served on various N.F.L. committees and helped expand the league’s international footprint by having the Bears play in the first American Bowl game in London, against the Dallas Cowboys in 1986.

In 1997, he moved the team’s headquarters from Halas Hall at Lake Forest College in Lake Forest, Ill., to a new home nearby, which had an indoor practice facility. He was a co-founder of the Bears’ charitable foundation.

Michael Benning McCaskey was born on Dec. 11, 1943, in Lancaster, Pa., the oldest of Edward and Virginia McCaskey’s 11 children. He grew up in Des Plaines, Ill., a suburb of Chicago, and graduated from Notre Dame High School in Niles, Ill.

He went to Yale University, where he played wide receiver on the football team for two seasons. He graduated in 1965 with a degree in philosophy and psychology. After two years working as a Peace Corps volunteer in Ethiopia, he earned a doctorate in business from Case Western Reserve University in Cleveland in 1972.

His marriage to Nancy Richardson ended in divorce. He is survived by his mother, who is 97; two children, John and Kathryn; three sisters, Ellie McCaskey Tonquest, Mary McCaskey and Anne Catron; six brothers, Patrick, Edward, George, Richard, Brian and Joseph; and a grandson. Another brother, Timothy, died in 2011.