A MEGA crossover fight between Dillian Whyte and Francis Ngannou is one step closer after the pair agreed to hold a virtual press conference.

Talk of the heavyweight boxer taking on his UFC counterpart has increased in recent weeks amid a war of words between the rivals.

And Matchroom have now confirmed a YouTube press conference featuring both men.

Taking place on Saturday, May 30 at 7pm, promoter Eddie Hearn will chair the latest edition of the ‘Rivals’ series.

Interest in a contest is thought to be high with British boxer Whyte upping the ante recently by branding Ngannou a “coward”.

At the announcement of the conference on Friday, the 32-year-old stated: “Whoever wants it, can get it.

“We can do two fights, one in the ring and one in the cage. We’ve both got power, we’re both in our prime and one punch can end it. I want to get it on and rock the world.”

The exact rules of a fight are still being hammered out with Hearn teasing the concept of “a ring that also transforms into a cage”.

And the Cameroon-born fighter is determined to face up to Whyte once the gauntlet is thrown down.

He said: “People have been talking about this potential fight for months now.

“This makes sense down the line, me and Dillian are going to cross paths. I don’t back down from a challenge.” 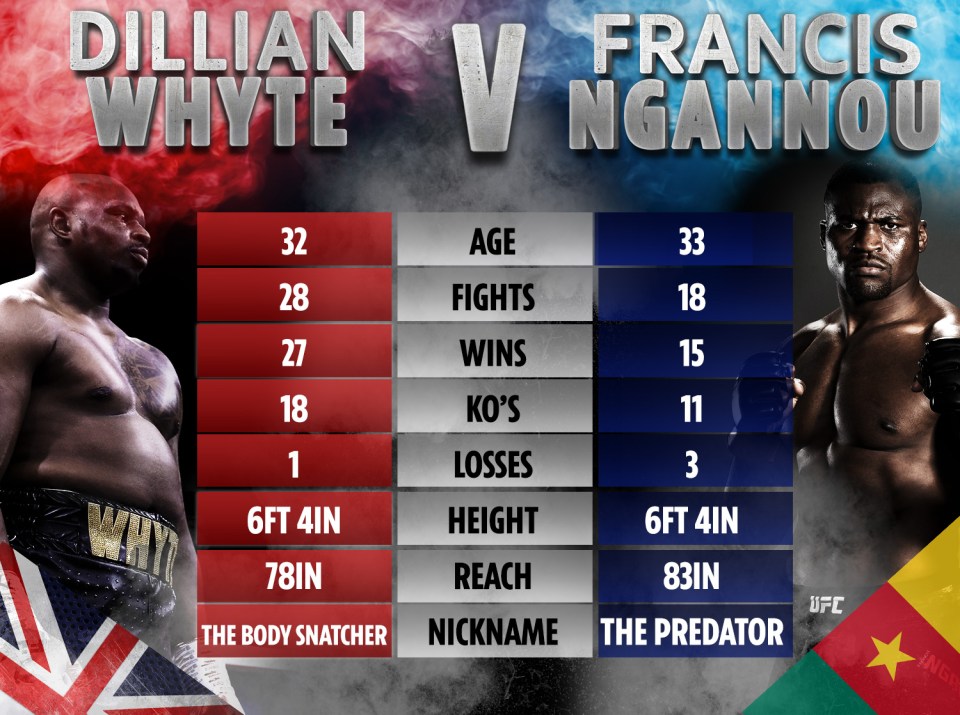 Officially speaking, next up on Whyte‘s radar is a bout with Alexander Povetkin as he continues his push for a heavyweight title fight.

But the prospect of taking on Ngannou could be a tempting diversion, with Hearn and UFC boss Dana White keen to test the waters.

“This isn’t a gimmick, this is two of the best and baddest in the world. Whyte vs. Ngannou would be huge.”